I had already been running a bit of numbers in response to the "Bullard rally" in October, so I tweaked things a bit to see if I could see the context of the Dec 16-18 move relative to other big rallies in the S&P 500 throughout history.

Now, a huge warning about this post and its findings - I do NOT have a Bloomberg terminal, so all of the data crunching I've done here has been by hand. Exporting the daily pricing data into an excel spreadsheet, calculating the 2 day returns, ranking them - etc. It's been fun, but there may be bone headed errors, even though I've tried my best to be as accurate as possible.

After ranking all of the 2 day rallies going back as far as I could (1928) - I found the Great Depression was providing way too much noise. So I thought I'd look at the data from January 2nd, 1940 to December 2014.

When I did that, some interesting things happened.

The date ranges I used for each particular crisis or event was the relative high as the start date, and the low as the end date. I did strip out the high market value reached before the Great Depression because the 31.86 high reached in 1929 wasn't recovered until 1954.

Doing this resulted in the following breakdown - 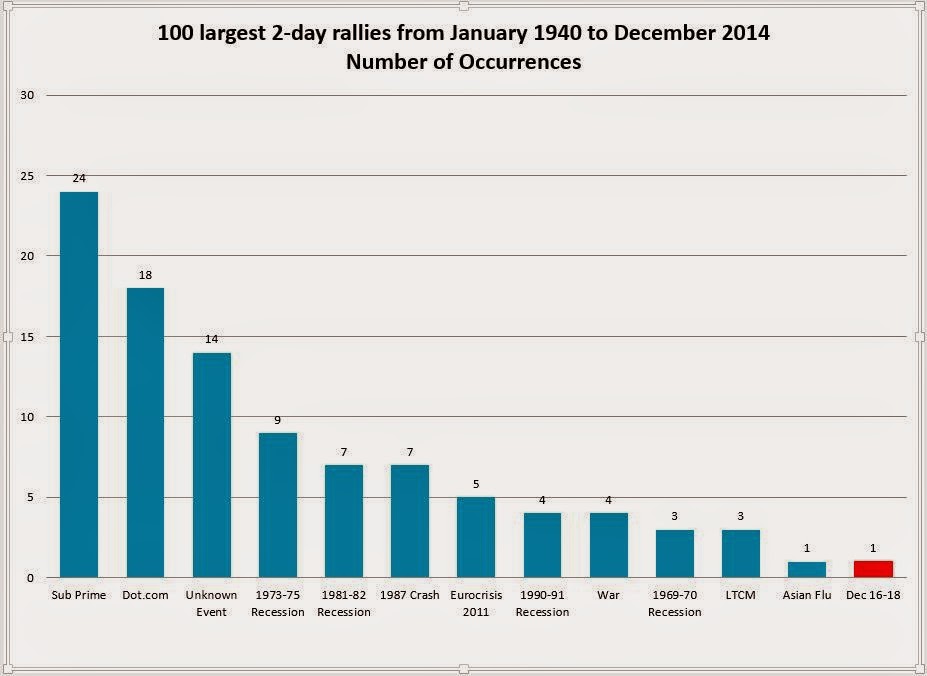 So, apart from the 14 days listed in the "unknown" category (which is more a function of me needing to do a bit more research than anything else) and the Dec 16-18th rally, 85% of the 2 day rallies between January 1940 and December 2014 occurred during a time of financial crisis, bubble chaos, recession or time of war. I found that very striking given the December 16-18th rally happened absent any of those markers.

The other question I had about the history or tendencies of huge 2 day rallies related to how they compared to the previous high. My guess was that many (or most) of these unusually large 2 day rallies would occur after a significant correction or pullback from a previous high. SO once again I did a bit of digging through the data.

While this breakdown doesn't provide any information that will help you with a trade, it does put the December 16-18 2 day rally of 4.49% into context. Given the rally occurred absent a recession, crisis, bubble or time of war - the magnitude of the rise is VERY unusual and should not be treated as 'normal' or "not noteworthy" -

A breakdown of the top 100 2 day rallies is snapped below for your interest - again, given this was all done by hand, there may indeed be some errors.. but I've tried to be as thorough as possible. If you notice an error please let me know and I will update my spreadsheet. Or, if you are able to track down any of the "unknown" events let me know..

copy of my spreadsheet is here

If you find this information useful GREAT!! If you reproduce it, post it, etc.. please do me a favor and provide attribution. I don't post much but it would be nice to get some credit if you find the material interesting.

McCulley, the Fed, rates and the ISM

I am a big fan of Paul McCulley and was a keen reader of his thoughts during his time at PIMCO (the first time around).

One of the best pieces I ever came across was entitled,

"Keeping the Rabbit at home and the Dog at the Office"

As you know I do a fair bit of bonds for my retail clients, so this piece was very interesting to me.. so - I set about to recreate Paul's work.. 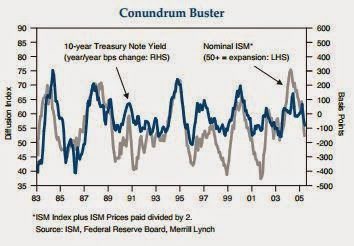 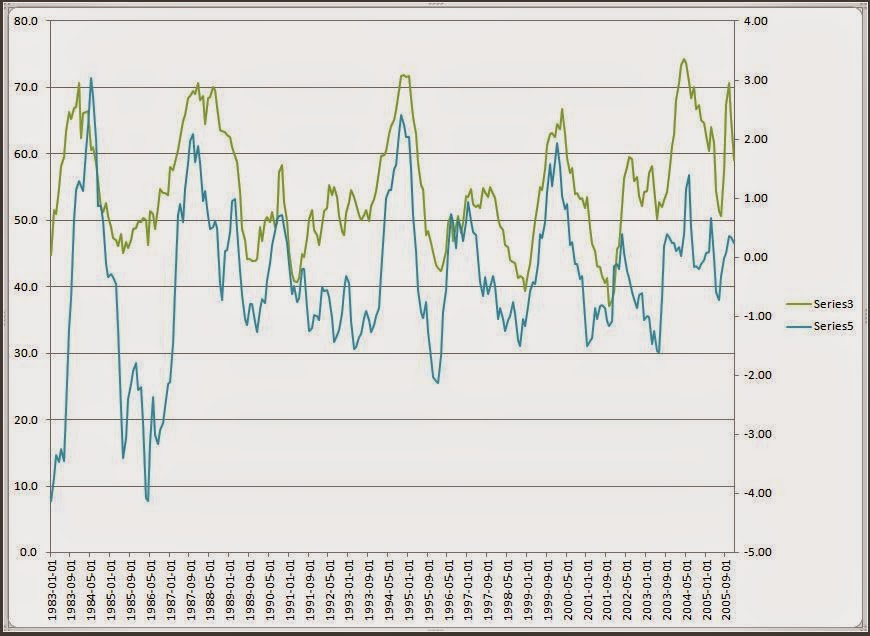 and then, I went off and applied the same set of rules to today's market. I've done this a few times (after the taper tantrum for example.. to check and see what I was missing) -

here's where we are today - 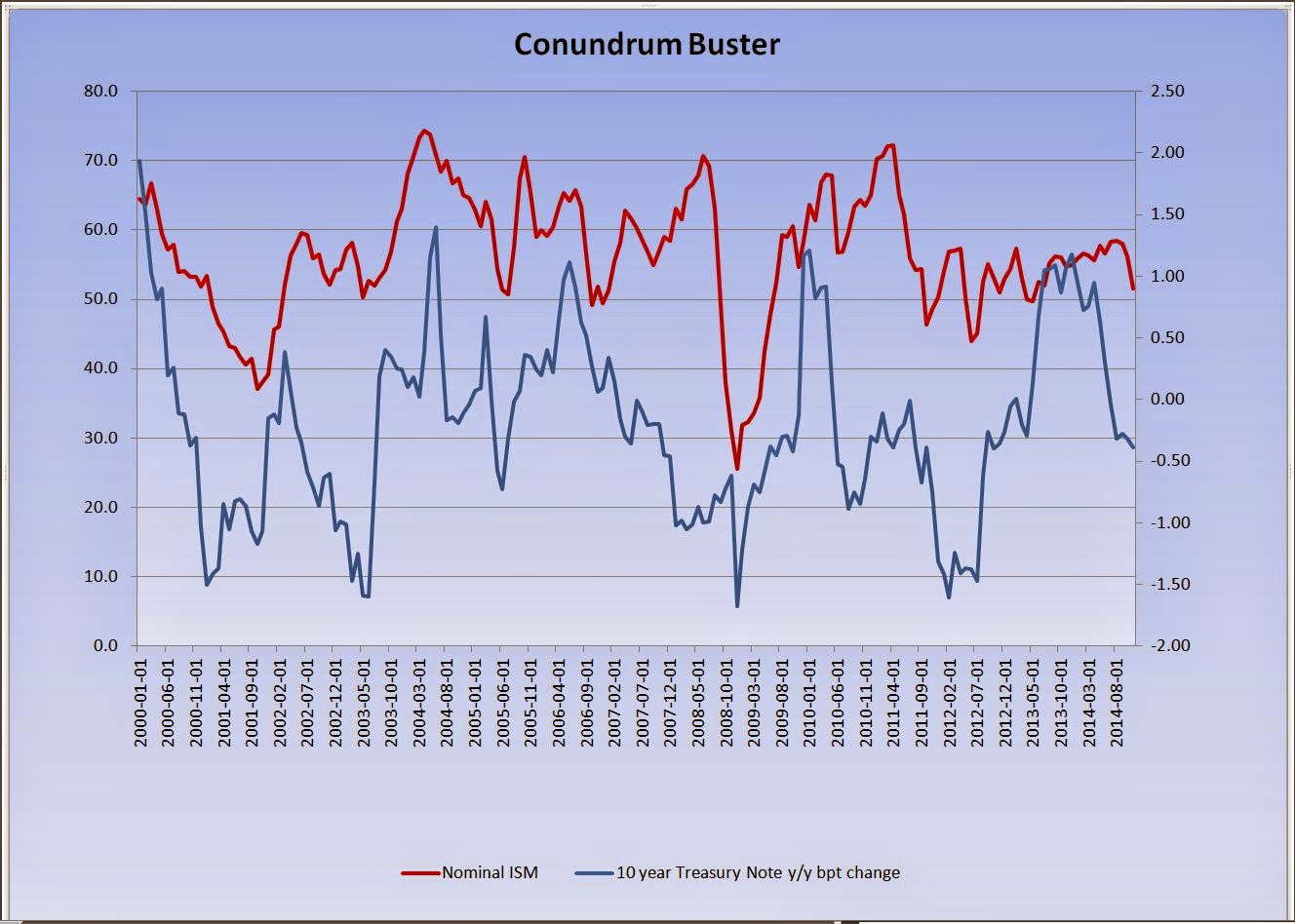 so to me, this continues to flash the "all clear" on rates. As such I don't think you will see rates rise because of fundamentals. We could however see a rate bump as per Gundlach's suggestions - but I doubt it would be much, or meaningful.. as the data just doesn't support a move higher at this point.