The Euphoric Rise and Inevitable Fall of Dr. Feelgood

“I got me a man named Doctor Feelgood
Yeah! Yeah!
That man takes care of all of my pains and my ills”
Aretha Franklin,”Dr. Feelgood” -  1967

Before Aretha Franklin sang about “Dr. Feelgood” there was a German doctor named Max Jacobson who ran a thriving medical practice in New York City. Dr. Jacobson’s office catered specifically to high profile celebrities such as Truman Capote, Eddie Fisher, Thelonious Monk, Anthony Quinn and Judy Garland. He also served as the physician of choice for U.S. President John F. Kennedy from 1960 to 1962. Jacobson’s patients nicknamed him “Dr. Feelgood” in response to the feelings of euphoria and energy they experienced after the doctor administered his ”specialized” vitamin injection therapy.
What most of the patients didn’t realize was that Jacobson’s magical cure actually contained between 30 and 50 milligrams of amphetamines, a mood elevating neural energizer that goes by the street name “speed.” The drugs were then combined with a jumble of other ingredients including multivitamins, steroids, enzymes, hormones, bone marrow, animal organ cells and solubilized placenta.
Obviously, given the true contents of the injections, the patient’s symptoms were never really “cured” but rather masked by the powerful psychotropic effects of the amphetamines. Thus, patient relief was artificial in nature and short term in duration as once the drugs wore off, the unaddressed ailments would inevitably return.
As one would expect, reality finally came crashing down on Max Jacobson and his fake remedies. In December 1972, Jacobson’s practice was exposed in a New York Times 1972 piece entitled “Amphetamines Used by a Physician to Lift Moods of Famous Patients.” As a result, Jacobson was charged with 48 counts of unprofessional conduct, and in 1975 the State Department of Education revoked his license to practice medicine. Jacobson died a few years later in 1979.
During his heyday, Jacobson bragged that his patients “went out the door singing,” which may have been exactly what inspired Aretha Franklin to sing about him in 1967.
Financial Parallels:
Ever since the start of the “Great Financial Crisis” in 2008, global central banks, including the Federal Reserve, have aggressively resurrected the role and unconventional remedies of “Dr. Feelgood.” Using a dangerous mix of liquidity, monetary accommodation, asset purchases and risk suppression, central banks have managed to create a sense of confidence and euphoria within the stock market that has served to mask the ongoing ailments within the U.S. economy. Put plainly, the economic recovery we “feel” today has been vastly overstated thanks to the regular financial amphetamine injections that have taken place since 2009.
In my 2014 macroeconomic thesis, “The View from 30,000 Feet, The US Economy Was Sick before the Crisis,” I showed how middle and lower income earners tend to hold fewer, if any, financial assets. As such, they have not been able to participate or benefit from the rising stock market as much as the extremely wealthy. 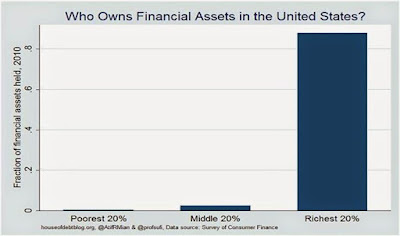 The growing gap between the wealthy and lower income earners is called “income inequality” and it is just one example of the many negative side effects that inevitably arise when a stock market is subjected to nine continuous years of aggressive drug therapy.
While central banks believe wholeheartedly in their amphetamine therapies, and regard the record level of the stock market as definitive proof that their injections are working, a more granular and thorough inspection of the global economy reveals continued sickness.
For example, Gross Domestic Product (GDP) in the United States continues to trend WELL below its’ historical norm. Absent central bank” injections,” it would be highly unlikely that these anemic levels of economic growth would result in the same kinds of stock market gains we’ve enjoyed since 2009. 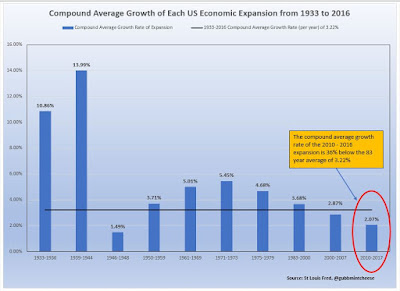 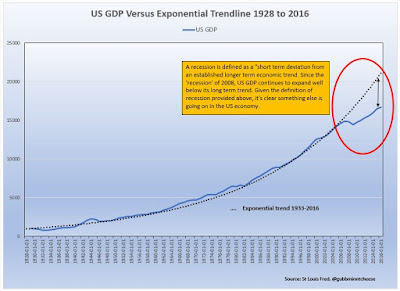 If there were no dangerous side effects to using amphetamines over the longer term, there would be no need for the government to strictly regulate its use. Doctors would be free to use injections regularly to suppress their patient’s underlying symptoms and all would be well. Unfortunately, this is not the case. Instead, physicians must focus on the health of the patient over the LONGER TERM, which suggests these extreme forms of drug therapies must be used sparingly, and over very short periods of time.
I believe we will eventually realize the central bank’s heavy handed and extended use of financial amphetamines did not result in a ”miracle cure” for the global economy at all. It instead created a false sense of wellness and euphoria within the stock markets that served to mask and suppress the ongoing problems that continue to exist within our economy.
As a portfolio manager, it is my job to obsess about stock market fundamentals and capital preservation for my clients over the longer term. The biggest concern I have today is that the vast majority of the stock market’s rise since 2009 has been a direct result of a drug induced state of euphoria that has been created and maintained by central bank monetary policy. I believe that as central banks begin to wean the stock market off their aggressive nine year drug program, these feelings of euphoria will fade and once again expose the true economic pain that’s been suppressed for all of these years.
It is for these reasons that I continue to invest with a very conservative and defensive bias. I am not allowing my strategies and investment advice to be influenced by the central bank induced hallucinations that I believe exist within the stock market and underlying global economy.
With the benefit of hindsight, the dot.com and sub-prime housing bubbles are now considered two periods where underlying fundamentals were usurped by a similar sense of strong stock market euphoria. In both “bubbles,” euphoria ultimately gave way to reality and the stock markets corrected sharply. When one looks at the stock market’s relentless rise since 2009, it’s very hard not to wonder if we aren’t perhaps falling for Dr. Feelgood’s short term ”cure” once again. 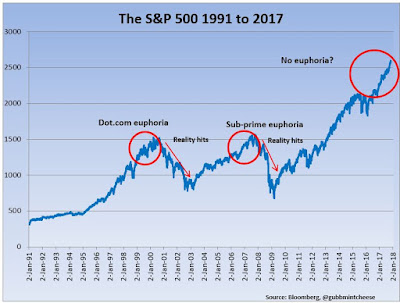