"Never overpay for stock. More money is lost than in any other way by projecting above-average growth and paying an extra multiple for it"

This has always been one of my favorite quotes, and I think it's one of the most relevant thoughts I've ever come across. Of course these days, valuation and fundamentals have been thrown into the back seat as other factors are currently influencing the market's direction. But, valuation - what you pay for the companies you buy - is always important. No matter what is going on in the short to medium term.

With that in mind, I wanted to give an example of what I'm struggling with regarding current stock valuations, and then tie that into Asch's paradigm in an effort to show how the financial industry gets itself into trouble from time to time.

So I thought I'd pick a company whose business I like, but am wary of the valuation. A name that everyone knows, and that has a great global brand: Proctor & Gamble (NYSE: PG). I like the company because of it's incredible stability. It's paid a dividend every year since 1890, and has raised its dividend for 58 years in a row. The company boasts an incredible brand - selling products under the names Tide, Gillette, Pampers and Crest.

At the time of writing this post, PG shares were sitting at $80.79 - (link for current quote here)

Sidenote: See, way way back when I started in the business (1993) all PE ratios were based on trailing earnings, as those were the earnings actually earned and recorded into the books. The 'forward earnings' references started a few years after I started. Initially research pieces quoted forward earnings only going out a year into the future, but as the practice took root, it's now not unusual to see estimates going out three years. We will get back to this on the second part of the discussion.

Now, here is where Neuhauser's comments come into play.

Unfortunately in the case of PG at its current price - we are no where close to that kind of valuation.

Now - there are a MILLION different ways to evaluate a company's worth that are more sophisticated that have merit and are worthy of your consideration - but I am using the PEG to show you what Neuhauser was talking about.

Remember what Neuhauser said.. "Never overpay for a stock. More money is lost than in any other way by projecting above-average growth and paying an extra multiple for it"

What does he mean by that?

Well in the case of our current example with PG, if we look at the company's compound growth rate (CAGR) in earnings from 1998 to 2015 (using current estimates) we find that PG has grown earnings at a rate of 7.82% per year - Pretty outstanding for a firm this mature.

But, if we buy the stock today at 19.94x trailing or 18.79x 2014's expected earnings, we are also breaking Neuhauser's timeless rule. This is where the financial industry can get itself into trouble.

Let me give an extreme example - if the PEG ratio on PG was 1.00 and reflected the company's average annual compound earnings growth rate from 1998-2015, the stock would be trading at $33.63, down over 58% from its current level.

Even a less extreme compression in multiples suggests a big decline in the price of the stock. Assume for example that PG's current trailing PE ratio only fell from 19.94x to 18x. In that case, the stock would move from $80.79 to $72.92.

I would suggest that investors also be very mindful when they see a stocks target price increase solely on the back of an increase in the assumed multiple.

An example of what I mean:

Assume XYZ Brokerage Firm initiated coverage on the company in October of 2013 at $76.00 with an $80.00 target price. As the price rises closer to the target price and the overall market environment is still bullish, it is not uncommon for a target price to get bumped up. But, there are times when instead of earnings assumptions increasing - from say $4.30 to $4.45 for 2014 - the analyst just tweaks the assumed multiple. In this case they'd say something like:

So, even though the earnings estimates haven't increased, the firm has managed to bump up the target price by over 10%.. ta da!

I for one am very wary of multiple expansion assumptions on stocks (to increase a target price) as there is no way to verify what 'exact' multiple is appropriate.

And this brings me to the second part of my post.. the Asch Paradigm.

I always found this experiment kind of interesting - 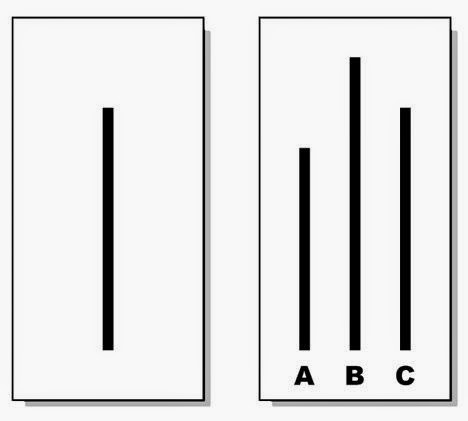 Male college students participated in a simple "perceptual" task. In reality, all but one of the participants were "confederates" (i.e., actors), and the true focus of the study was about how the remaining student (i.e., the real participant) would react to the confederates' behavior.

Overall, in the experimental group, 75% of the participants gave an incorrect answer to at least one question.

worth watching the video here -

Those work work in the business may never have heard of the "Asch Paradigm" before, but they are very familiar with its influence in the investment world.

"The central truth of the investment business is that investment behavior is driven by career risk. In the professional investment business we are all agents, managing other peoples’ money. The prime directive, as Keynes knew so well, is ﬁrst and last to keep your job. To do this, he explained that you must never, ever be wrong on your own. To prevent this calamity, professional investors pay ruthless attention to what other investors in general are doing. The great majority “go with the ﬂow,” either completely or partially. This creates herding, or momentum, which drives prices far above or far below fair price. There are many other inefﬁciencies in market pricing, but this is by far the largest."

that hints at the same Aschian phenomenon of conformity going on with the Fed's GDP forecasts. Peter's article is a 'must read' as he rightly questions how the Fed can justify its' call for strong future growth given the volatility we've seen in other economic data points to date.

Well the market is continuing it's run higher, of that there is no debate. But, as Charles Neuhauser warned, more and more people are assuming an above average growth rate and then tacking on a few extra points to the multiple when they buy. The narrative of the day is that growth is getting better, and that escape velocity is 'right around the corner', but this narrative has been running in a similar fashion for the last five years. Maybe, just maybe we are seeing yet another example of what Asch discovered in his experiment and Jeremy Grantham mentioned in his letter.

Just ask yourself what happens to share prices if stock multiples start to reverse course and compress? What happens if PG's PE ratio falls from almost 20x to 12x (which as we know is still above it's longer term CAGR)? What happens if you find out the conformist's narrative was wrong?

Sure there are lots of different ways to value a stock and account for the rise we are seeing (PEG is obviously a very simple valuation method) - but that's entirely my point: When it comes to investing, you need to think for yourself and don't never fall victim to a conformity trap.

Just something to consider -