The Fed's Playbook Uncovered: Gaslighting us to recovery

If I was given a dollar for every time I saw a headline, looked at a chart or watched some market guru say something on TV that made me think I had lost my mind over the last 8 years, I’m sure I’d be a zillionaire by now.

Kyle Bass described the growing gap between fundamentals and investment behavior in a 2011 newsletter entitled, “The Cognitive Dissonance of It All”. In 2014, legendary hedge fund manager Seth Klarman warned “There is a growing gap between the financial markets and the real economy.. and the overall picture is one of growing risk and inadequate potential return almost everywhere one looks…. As every “Truman” under Bernanke’s dome knows the environment is phony”.

While we may indeed be living under a dome with a 'phony economic environment', it's clear that the market is more than happy to surge ahead - fundamentals be damned. The S&P 500 has jumped an additional 25% since Klarman’s warning, and a whopping 77% since Bass described the 'cognitive dissonance of it all'.

So how does this happen? What happens to enable a stock market to disconnect so widely from its underlying fundamentals?

After more than a decade of diving deep into the macro, I've come to the conclusion that the disconnect between economic fundamentals and stock prices is being perpetuated and nurtured by the Federal Reserve. To put it as bluntly as I can, I think the Fed is trying to "gaslight" us towards an economic recovery.

“Gaslighting is a form of manipulation that seeks to sow seeds of doubt in a targeted individual or members of a group, hoping to make targets question their own memory, perception and sanity”

Using persistent denial, misdirection, contradiction and lying, it attempts to destabilize the target and delegitimize the target’s belief” – (link: https://en.wikipedia.org/wiki/Gaslighting)

Those of you who will stop reading this article because you think my ‘gaslighting by the Fed’ theory is nothing more than the pointless ramblings of a tin foil hat conspiracy theorist actually help prove my point. (you've already been gaslighted).

There are a ton of examples of the Fed "talking up" the economy while simultaneously ignoring some pretty significant contradictions. First and foremost is there constant reference about the  "strongest jobs market in decades"

while it is true that the unemployment rate and jobless claims are indeed at record lows, is it accurate to suggest that it's the "strongest employment picture in decades" as the Fed has described?

Even a cursory review of the employment statistics by the simplest of macro tourists would raise a few questions. First and foremost would be the precipitous decline in the labor force participation rate:

of course some (the Fed, market bulls and the Whitehouse) tried to explain away the issue by blaming demographics and suggested the decline was "expected".

This flimsy excuse served to placate most of the macro tourists, but the more hard nosed and thorough researcher easily discovered that this explanation falls short. All they needed to do was look a bit deeper into the LFPR -

while the LFPR for people 65 and older is rising

So given the data available, a 'thorough & objective' review of the information above yields a starkly different perspective about "the best jobs market in decades". In fact, it would suggest that the more accurate unemployment rate in the US is actually closer to 7.00%. 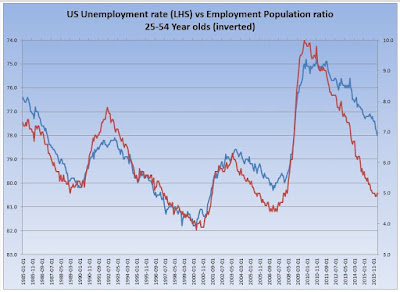 Interestingly the new Fed narrative on the decline in the LFPR emerged a few days ago when Fed member Pat Harker (during a Q&A session) suggested, "opiate abuse is part of the reason for the decline in male employment in the US, also there are people who are just disconnected from the workforce".
(link: http://www.zerohedge.com/news/2017-02-15/feds-harker-blames-prime-aged-american-male-joblessness-drug-abuse)

Drug addiction is a big part of the 90m plus people who have left the labor pool? Seriously?

The next noteworthy contradiction is found in the growth in average hourly earnings. Again, a simple macro tourist would just look at the headline and proclaim "this is bullish, the economy is getting better".

knowing this fact explains why real disposable income isn't reflecting the bullish proclamations made by the Fed, Wall Street and the Whitehouse.

These are just a few examples of the stark contradictions that exist within the marketplace.

The purpose of this post isn't to highlight ALL of the contradictions at play, as that would require more writing than I am prepared to do at this time (plus I just want to post to my blog, I don't want to write a book). Instead, this post is intended to expand on a theory about what the Fed might be trying to accomplish by misrepresenting the economic facts as they are.

As I can best surmise, the Fed is trying to project confidence to Americans that the economy is getting better. But rather than have some anonymous macro-nerd, hunk of cheese turned blogger explain, why don't we get the information straight from the horse's mouth.


In November 2010, the Federal Reserve Bank of San Francisco published a paper entitled, "Confidence and the Business Cycle"

here were some of the more noteworthy observations:

"Indicators of consumer confidence have been at depressed levels in recent months. Business sentiment is also low, reflecting uncertainty about U.S. fiscal policy and the perception that economic weakness may be prolonged. This lack of confidence raises the risks that pessimism can become entrenched and self-reinforcing, further dampening the nascent recovery"

"These experiences suggest that optimism about the future helped fuel economic booms and that subsequent buildups of pessimism contributed to the busts."

"In macroeconomic models, this information changes people's expectations about the future and thus their current [emphasis theirs] economic decisions."

"Clearly, confidence reacts to a host of economic developments. Identifying a causal link between confidence and economic performance is therefore challenging. Is confidence higher because the economy is booming or vice versa?" [emphasis added]

So how would we check to see projecting confidence to consumers is indeed part of the Fed's post crisis playbook?

A recent post and chart by Tyler Durden on Zerohedge inspired this trip down the rabbit hole.

Here's the chart that attracted my attention:

Curious, I decided to pull the University of Michigan's Consumer Sentiment data and pair it up with the performance of the S&P 500 to see if there were any noticeable correlations out past the chart timeline above.

Here is what I found: 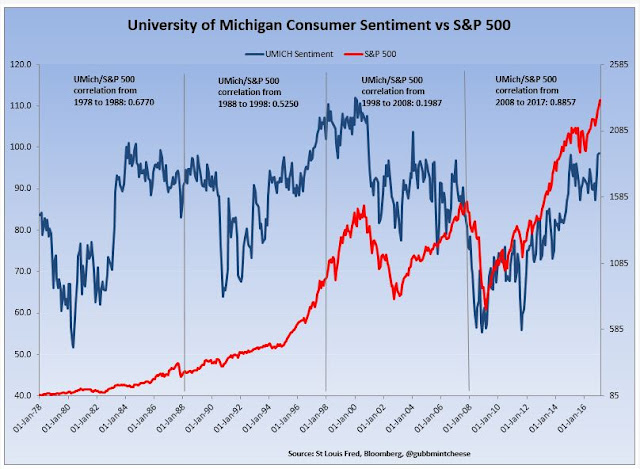 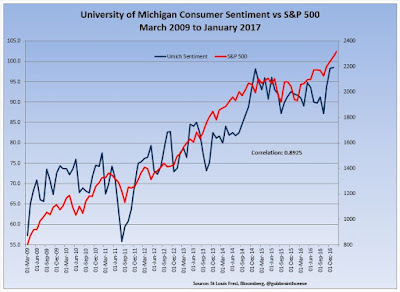 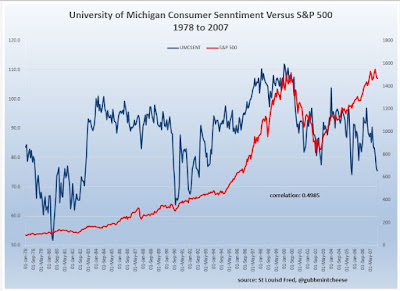 What does this all mean? Well it certainly helps me feel a bit better as I listen to Janet Yellen talk about a robust U.S. economy, or a strong jobs market, and watch as the Fed leaps to action anytime there is even the smallest correction in the US stock market.

On paper the strategy does make some sense, as confidence (or pessimism/fear) does indeed have a strong impact on the economy. Consider for example how the sniper killing spree impacted the local DC economy in 2002 -


Unfortunately I think the Fed's strategy isn't working, as the consumer has been in serious financial trouble since well before the crisis, something I laid out in my larger macro thesis a few years ago:

While it might sound a bit arrogant to suggest that the Fed is 'wrong' given the brain power that works there, it's important to remember what they were saying just before the sub prime crisis in 2008. 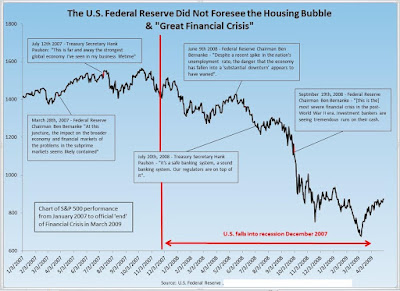 So they either didn't' see it coming, or they did and said nothing. Neither of these two options is particularly comforting to me as an investor.

Confidence is a great thing, unless of course it leads to wildly unrealistic expectations, which is what I tend to think is happening when you look at the gap between the stock market and the underlying economy.

Obviously based on the correlations I've covered above, it appears as though the Fed's post-crisis  playbook is working hard to gaslight us towards a recovery.

So investors, don't trust your own experience and feelings about the economy. Instead trust Auntie Janet when she says, "don't worry - be happy".

some other work on the 'recovery' by Gubb:

The Fed has Created a Prisoner's Dilemma