Gubb's observations and view on market

Here’s a theoretical question for you: If someone doesn’t realize they are standing on thin ice, are they in a risky position if the ice doesn’t break?

This might sound like an odd, semi-obvious question, but when you apply the same basic concept to investing (i.e. “Does the stock market need to fall before there is any ‘risk’ in holding stocks?”) you might have a better understanding about some of the challenges we as portfolio managers confront on a daily basis. Namely, what should I advise my clients to do if I see dangerous levels of "thin ice" building within the stock market?

I mention this theme as a follow up to the note that I sent out at the beginning of 2016. In that message, I took a bit of time to discuss the state of the stock market (which was down a whopping 12% in the first 15 days of 2016), and provided some observations about the health of the economy, numerous interventions by the central banks and my concern about the expanding gap that persists between underlying fundamentals and share prices.

“…. Central bank bailouts (by the Federal Reserve, Bank of England, European Central Bank, Bank of Japan and the People’s Bank of China) were attempting to solve a complex economic problem by simply burying it under a mountain of money and a rising stock market.”

I followed that observation with:

“Investors took the central bank’s pledge to “do whatever it takes” to heart, and share prices rose quickly off their 2009 lows to all-time record levels a few years later. But, as stocks raced to higher and higher levels, a problem was building whereby either the economy would have to “catch up” to the level of the stock market, or the stock market would have to “catch down” to a more realistic measure of the underlying economy.”

As bleak as the beginning of 2016 looked for investors, the year ended with a bang and the S&P/TSX Composite Index, the S&P 500 Index and the Dow Jones Industrial Average closed up at 17.5%, 9.5% and 13.4% respectively. As with previous years (since 2009), the gains in the stock market weren’t earned thanks to dramatically improving economic growth or a strong rise in corporate earnings (earnings have fallen by 18% since the start of 2015). Instead, the gains enjoyed in the stock market were helped along by the promise of more central bank support and intervention. Consider these comments from a news story (U.S. Stocks Rally Along With Global Markets as Brexit Worries Ease, Wall Street Journal, June 29, 2016) that discussed the sharp, three day 6.75% decline in the U.S. and Canadian stock markets that immediately followed the shocking “Brexit” vote results from June:
“Many investors now expect major central banks to act to counter a potential drag on the global economy after the Brexit vote, with some predicting rate cuts from the Bank of England and further stimulus from the European Central Bank. Some also expect the Brexit vote to derail the U.S. Federal Reserve’s plans to raise interest rates this year.”
Perhaps I am guilty of being too cautious and cynical with regards to my confidence that the global central banks will be able to find a solution to our ongoing macroeconomic problems, but I feel as though I come by my distrust and skepticism honestly. Consider the comments made by the Federal Reserve and U.S. Treasury Secretary a few months BEFORE the sub-prime housing crisis started: 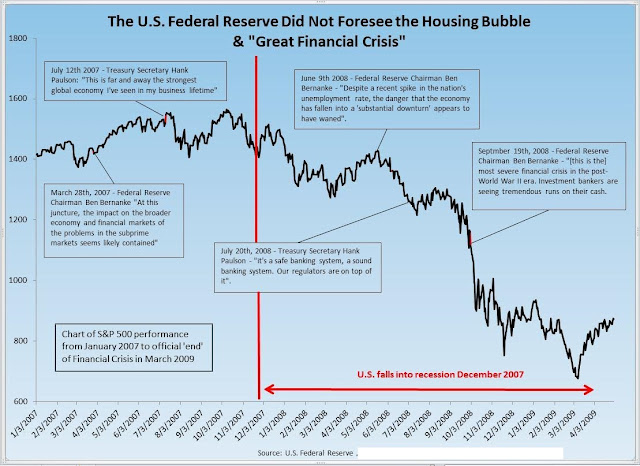 As you can see in the chart above, the Federal Reserve was on the record stating that investor concerns about the housing and financial sectors (i.e. thin ice) were greatly overblown mere MONTHS before the Great Financial Crisis started in earnest. Any investor who relied on the promises of the U.S. Central Bank and remained ‘fully invested’ saw the value of their holdings fall dramatically over the coming year. A recovery in the stock market was only made possible via an unprecedented number of coordinated central bank interventions (QE1, QE2, QE3, and Operation Twist, European Central Bank QE, Bank of Japan QE and a move to negative interest rates, just to name a few).

Successful investing requires people to buy good companies at cheap prices and sell those shares when prices are high, thus inspiring the popular expression “Buy low and sell high.”  Unfortunately, markets saturated with seven plus years of central bank accommodation and intervention have become so distorted that it’s virtually impossible to invest in stocks based on traditional fundamentals. Given the gap between stock prices and fundamentals, investors are now hoping to “Buy high and sell higher,” a strategy that history has proven countless times to be highly ineffective.

“I don’t think a single trader can tell you what the appropriate price of an asset he buys is, if you take out all this central bank intervention.”
-Alex Weber, former head of the Bundesbank (CNBC, October 10, 2016)

How substantial is the gap between current share prices and underlying fundamentals? That is, how thin do I think the ice is in today’s stock market? A comprehensive reply would require hundreds of pages of charts and graphs drawn from some of the more than two dozen economic models that I have built from scratch over the years and maintain on a regular basis. Perhaps the most succinct & simple perspective comes from a chart using Robert Shiller’s CAPE (Cyclically Adjusted Price Earnings) data. The CAPE uses a 10-year moving average of S&P 500 earnings to try and smooth out business cycle volatility in an effort to provide a clearer view of stock valuations. As you can see from the chart below, current CAPE valuations suggest that the S&P 500 is currently at the 3rd most expensive level in history, trading almost two standard deviations above its long-term (126 year) average. Only the periods just before the crashes of 1929 and the dot.com bubble were higher than valuation levels today. 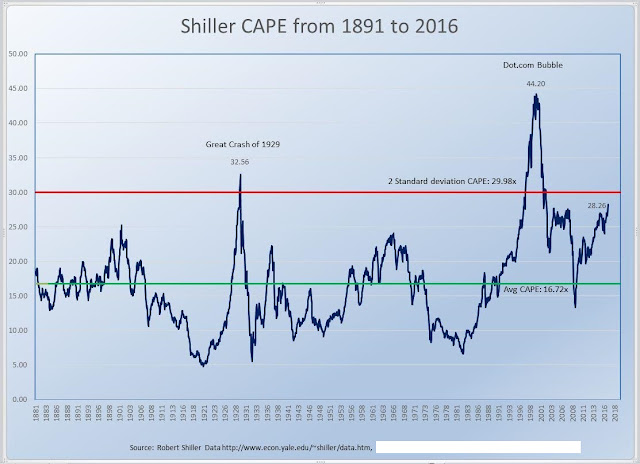 Some quick math puts the current market valuation in context:

Conversely, if the stock market had to ‘catch down’ to fundamentals, thereby re-converging at the long-term average of 16.72x, the S&P 500 would have to fall from today’s level of 2,280 to approximately 1,458, suggesting a possible decline of 36%  just to get back to the long-term average.

This is just some of the ‘thin ice’ that has me concerned as a portfolio manager. While this thin ice hasn’t broken (yet), it certainly doesn’t mean that the risks I’ve discussed here aren’t present. Given my mandate is to not only invest to generate suitable returns, but also to mitigate undue risk, I feel as though a cautious, defensive stance continues to be warranted at this time, even as the market continues its rapid ascent to new record highs.

I leave you with a wonderful quote from Seth Klarman (zerohedge.com, May 5, 2013), who is regarded as one of the best hedge fund (and risk) managers in the world:

“Only a small number of investors maintain the fortitude and client confidence to pursue long-term investment success even at the price of short-term under performance. Most investors feel the hefty weight of short-term performance expectations, forcing them to take up marginal or highly speculative investments that we shun. When markets are rising, such investments may perform well, which means that our unwavering patience and discipline sometimes impairs our results and makes us appear overly cautious. The payoff from a risk-averse, long-term orientation is just that - long term. It is measurable only over the span of many years, over one or more market cycles.
Our willingness to invest amidst failing markets is the best way we know to build positions at great prices, but this strategy, too, can cause short-term under performance. Buying as prices are falling can look stupid until sellers are exhausted and buyers who held back cannot effectively deploy capital except at much higher prices. Our resolve in holding cash balances - sometimes very large ones - absent compelling opportunity is another potential performance drag.
But we know that in a world in which being anti-fragile is good, what doesn't kill you can make you stronger. Short-term under performance doesn't trouble us; indeed, because it is the price that must sometimes be paid for longer-term out performance, it doesn't even enter into our list of concerns. Patience and discipline can make you look foolishly out of touch until they make you look prudent and even prescient. Holding significant, low or even zero-yielding cash can seem ridiculous until you are one of the few with buying power amidst a sudden downdraft. Avoiding leverage may seem overly conservative until it becomes the only sane course. Concentrating your portfolio in the most compelling opportunities and avoiding over-diversification for its own sake may sometimes lead to short-term under performance, but eventually it pays off in out performance.”