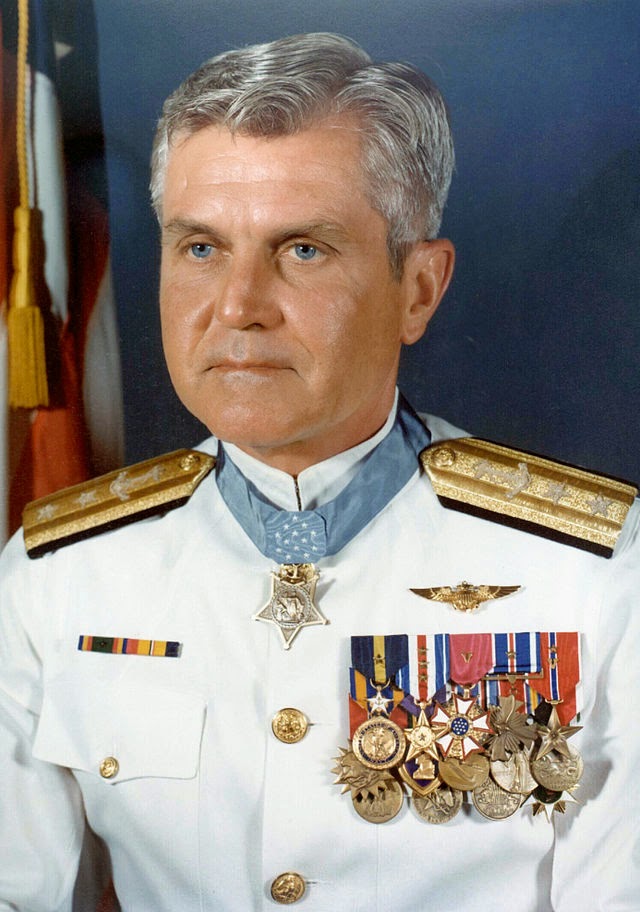 The Stockdale Paradox is named after Admiral James B. Stockdale, who was the highest ranking US Military officer imprisoned in Vietnam during the war. Stockdale was shot down while flying a mission over North Vietnam on September 9th, 1965 and taken immediately to the infamous Hoa Lo prison, also known as "The Hanoi Hilton". Stockdale was a "prisoner of war" and 'lived' there for the next seven and a half years.

In the summer of 1969, he was locked in leg irons in a bath stall and routinely tortured and beaten. When told by his captors that he was to be paraded in public, Stockdale slit his scalp with a razor to purposely disfigure himself so that his captors could not use him as propaganda. When they covered his head with a hat, he beat himself with a stool until his face was swollen beyond recognition. When Stockdale was discovered with information that could implicate his friends' "black activities", he slit his wrists so they could not torture him into confession. Stockdale was released as a prisoner of war on February 12, 1973

Year later, author James C. Collins was interviewing Stockdale about his time at the Hanoi Hilton for a book called "Good to Great" - during the interview, Stockdale explained how he managed to survive all those years as a POW. He said,

"I never lost faith in the end of the story, I never doubted not only that I would get out, but also that I would prevail in the end and turn the experience into the defining event of my life, which, in retrospect, I would not trade."

Collins followed up by asking Stockdale who didn't make it out of Vietnam alive. Stockdale replied,

Stockdale then added, "This is a very important lesson. You must never confuse faith that you will prevail in the end—which you can never afford to lose—with the discipline to confront the most brutal facts of your current reality, whatever they might be."

It was this philosophy of duality, that inspired Collins to describe it as the Stockdale Paradox.

Why am I writing about this rather dark and depressing paradox this month?

Well as I am sure you have figured out by now, I think it does a wonderful job of explaining how I am wired as a Portfolio Manager. While my letters over the years may sound dire and dark, the truth of the matter is that I have great hope and excitement about our future. I have faith that we will see through these difficult times, and get back to less chaotic days. But, as with Stockdale, I also possess the discipline to confront the most brutal facts of our current reality.

It was this discipline that enabled me (as you know) to completely avoid the dot.com bust in 2000, as well as the Great Financial Crisis of 2008/09, even as many in the industry ere busy assuring investors that "all was well" - .

Ben Bernanke: No Housing Bubble in US -

Of course we know both of the statements above turned out to be spectacularly incorrect, and led to massive losses by investors.

Now, in 2014 the stock market has hit all time record highs as expectations that the US economy is approaching "escape velocity" - but, my discipline and macroeconomic research believes this is yet another naively optimistic narrative.

To borrow the paradox above, the US stock market has been saying they will see escape velocity by Thanksgiving, then Christmas, then New Years, then Easter.. Those of us who have been keeping track know that they've been saying this for the last 5 years.

Confronting the brutal facts about our current economic situation tells us that while things are certainly better than they were in January or February 2009, they are a very long ways away from anything that could be construed as "Escape velocity". As such, the longer true "escape velocity" eludes the US economy, the stock market as with those unfortunate souls who did not make it out of the Hanoi Hilton, run a massive risk of dying from a broken heart.

Just something to consider.

* a h/t to Zerohedge. While I was very familiar with the story of James Stockdale's torture, I had forgotten about the paradox - something they mentioned in two fantastic posts here and here. I wrote something similar not to try and pretend this was my original idea, but to record these thoughts on my own blog for future reference.

The industry is getting lazy...

I should preface this - and all of my posts for that matter - by saying that my scope and experience is purely on the retail advisory side. I've never worked in straight banking, nor on the institutional side and I don't have a CFA and am certainly NOT an equity analyst. I started straight out of University in 1993 and everything I know today I've picked up along the way.

I run individual investment portfolios - I manage the investments of your Mom or Dad, your Grandparents, or your Aunts and Uncles. I don't do futures or currencies and stick to running mostly vanilla stocks and bonds.

The more I read about how some people trade via twitter, the more I realize that my specific portion of the investment world is basically the phytoplankton of finance. We are small and individually insignificant but do play a big part in supporting the bigger financial ecosystem. Bigger players have other terms for us, "muppets" comes to mind.. which is fair enough, so call me Gonzo.

I will concede that perhaps the observations I make, as a small phyto-financial plankton don't mean a hill of beans to the bigger ecosystem. But if I do say so myself I think I have developed a bit of a knack for identifying problem areas before they occur.

Yes I admit it freely - I'm wired to worry.

I am more often than not inclined to take the safer road and the cautious approach than to seek out risk. Personally think you kind of need this mindset if you want to work in retail and manage "Other People's Money".

I mentioned the problem that I have with analysts getting "lazy" with their target prices and advice on stocks in "Charles Neuhauser meets the Asch Paradigm" - in today's market I am seeing a TON of target prices getting bumped up even as earnings estimates fall. Paying 24x next year's estimated earnings on a stock whose longer term eps growth rate averages 4 or 5% is just asking for trouble.. but, many ignore the rules.

I'm seeing so many target prices being bumped up a few dollars via an expanded multiple assumption rather than any higher assumed earnings - just so analysts don't have to answer the question of why the stock isn't a sell.

It's that Keynesian career risk thing - you don't want to put a sell recommendation on a stock only to have it keep rolling higher on you.. client's don't dig that.

But you know what? An expensive stock is an expensive stock.. and call me naive but if you are simply slapping an additional 1.5x multiple on an ALREADY LOFTY forward PE.. just because the momentum of the stock continues to be higher.. what sort of value are you adding to the portfolio?

Also - given earnings growth and fundamentals are clearly NOT driving the share price.. how on earth are you going to know when to get the hell out of the way?

I find too many just accept the upside without paying too much attention to the fine print (or lack thereof).

Stock is moving through your target price? Well then take a look at your model and see if you are missing anything that could explain the action.. more growth coming from somewhere you didn't anticipate? Are your earnings expectations too conservative? But for god's sake don't just look at the street consensus and slap another 1.5x on so you can increase your target price by $5.00..

Clients pay us a lot of money to work diligently on their behalf.. if a stock is expensive.. it's expensive.. if it has a target price of $50.00 and it's trading at $56.00 with no new catalysts to push your earnings estimates higher.. you need to at LEAST do the math to see if you should ease the size of the position down.

If I'm running my own funds then it doesn't matter - but the last thing in the world you want to do is be overly optimistic on a stock or market with client money..

Most in retail tend to be fairly heavy in equity anyhow (some I know are basically 100% in stock.. holy crap..) - so if they are WRONG on the recovery and the bull market.. they don't get hurt.. but man, do the clients get smoked.

Just a small rant.. I saw about four 'increased target prices' using the same cheeky pe expansion (even as estimated earnings were REDUCED!!!)

Somewhere, Charles Neuhauser is shaking his head and waiting to say