Yet another unexplained 2 day rally in the S&P 500

Back in December of 2014 I took a bit of time to analyze the biggest 2 day rallies in the S&P 500 using daily prices from January 1940 to December 28th, 2014. I made a decision to ignore the 1929-1939 "Great Depression" period as the volatility experienced in the stock market at that time completely dominated the data set and I figured 75 years of daily prices was a sufficient sample size.

After crunching through the data, I came up with the following summary: 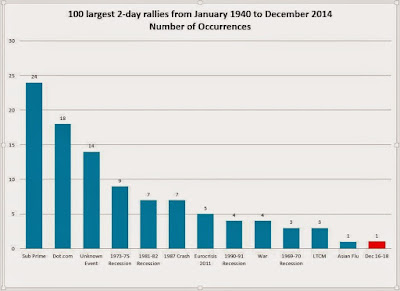 As you can see, the majority of the larger 2 day rallies had some form of catalyst or cause - be it a declaration of war, a currency crisis or the volatility during the popping of a bubble. I admitted that the "unknown" category was more a function of my lack of access to news, and (ahem, laziness) than it was these 14 days not having an explanation (I do these posts on my 'free time'... which is scarce).

Given the massive rally we just witnessed over the last few days of August - I thought I'd go back and revisit this data set to see how the August 25th to 27th rally measured up. It was impressive -

This rally is even more impressive when you consider the other characteristics of large 2 day rallies:

It happened absent a typical mitigating factor such as a currency crisis, a popping stock market bubble, a recession or the outbreak of a large scale war. At best you 'could' suggest that the initial 1089 point drop (or 6.6%) in the Dow on the morning of August 24th was a Crash - something similar to the Crash of 1987, but I would remind readers that the Dow managed to recover 501 of those points and only closed down 588, or 3.57%. Even at its' worst this 1089, 6.6% intraday low can not compare to decline of 22.61% in a single day - it can't even break into the top 20 list of single day declines in Dow history (going back to 1899).

I pulled off a revised "Top 30" two day rallies of all time (going back to January 1940) - and listed the catalyst for each one (Crisis, bubble volatility, war, etc). All of the largest two day rallies rallies seem to have an explanation except for one (in red) - which I find very interesting. 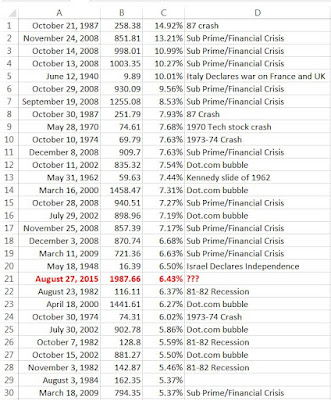 So, the next time someone tells you that the rally from August 25th to 27th was a "no brainer"  and should have been expected, mention that the rally was a 4.6 sigma event that ranked 21st out of a total of 19,021 two day rallies dating back to January 1940. It was also a rally environment completely void of any of your typical market chaos. In a nutshell it was hardly "business as usual".
Posted by Gubb at 10:03 PM 7 comments:

I have read so many stories about Vancouver homes selling above their listing price over the years that I find myself completely numb to the phenomenon now. Of course every once and a while I’ll read a story of some house selling at an astronomical price, and I’ll try to comprehend the logic and fundamentals behind these moves. But after so many years of seeing these stories, I find the shock and confusion fades quickly and I get back to my day as if everything was normal. But I think it doesn’t take a real estate specialist or an international monetary watchdog to see that things in the Vancouver real estate market are far from 'normal'.

Some news articles have made an attempt to explain the drivers behind the market’s incredible jump. In this link, a real estate agent explains that the premium paid on the home he sold recently was simply the result of a very successful marketing strategy.

"I would call it strategically listed to garner the interest level that we wanted to get [and] the result that we got."

So, if we are to believe this agent's explanation at face value, the action of listing the home at an lower than market price generated an above average response of prospective buyers which in turn led to excess demand to buy, which ultimately led to a sale price that was fully 35% above the actual asking price.

While some agents do indeed list homes to garner more attention from prospective buyers, expecting this strategy to net an offer that is 35% over your asking price (in an already red hot market) seems to be a bit of a stretch (to this blogger at least).

Is it really true that you can lower the asking price on a home and wait for crowds of people to come in and offer an above ask price? Or, is this less a case of 'brilliant marketing' and more a case of a euphoric bull market that exists within a specific area of Canada.

While there is no denying that Vancouver has been growing steadily for decades (it really took off after the Expo in 1986 put them on the map), the last few years have been well beyond explanation -

As discussed above, it’s to the point now where it is commonplace for homes in the Greater Vancouver area to be selling for huge premiums over asking prices.

Here are a few recent examples of stories -

What confuses me is why is no one is interested in digging down into the details of these transactions to find out exactly what is driving Vancouver real estate? Most of the stories provide guesses, theories or thoughts on where the demand ise coming from, but as of yet there have been no definitive reports provided. Some pundits suggest Vancouver prices are simply catching up to other great cities, while others suggest an influx of Mainland Chinese funds are driving prices.

Personally I think the theory of Chinese money flooding into the Vancouver market has a lot of merit and is absolutely worth looking into in more detail. Unfortunately apart from ‘ancedotal evidence’, any further information on the influx of Chinese buying hits a major roadblock. For example, MacDonald Realty recently suggested that over a third of all sales had mainland Chinese ties , but further down in the same article we are told that the 'data is unavailable to confirm' the thesis. Specifically it said,

The most interesting thing about this “lack of data” excuse is that it’s false.

But don't take my word for it - just go to the  Financial Transactions and Reports Analysis Centre of Canada website - and then look at the section on real estate..

Guideline 6B: Record Keeping and Client Identification for Real Estate

and client identities (including 3rd parties) -

So, based on the information taken directly from the Canadian Government's FINRAC website, real estate agents and brokers are required to record the identity of their clients (including 3rd parties) and the origins and amounts of money used for "ANY TRANSACTION OVER $10,000".

This means that contrary to the narrative, the data on who is buying what in Vancouver IS available and therefore we could determine how much money is coming in from Mainland China absolute certainty. Unforunately for some reason, we choose not to.

I have no idea why interested parties (Municipal, Provincial and Federal Governments, corporations, Real Estate Boards and financial firms) don't see the value in having a better understanding of exactly who is dabbling in their real estate markets, but my gut tells me that all related industries have taken a "don't ask, don't tell" approach.

Put simply - They just don't want to know the answer. And more importantly, I think they don’t want us to know either.

As with anything in life, ignoring or suppressing issues in the hopes that any “inconvenient truths” go away or resolve themselves on their own hardly ever works.

In my mind, the most important lesson to take away from what’s going on in the Vancouver real estate market today is this: “As with trees, real estate prices don’t grow to the sky”.

There is no denying the fact that Vancouver is a beautiful city, and that many people want to live here. But the phenomenon of paying 35% over the asking price of a home is not a typical occurrence, and instead reflects an overly euphoric market. While we don’t know when a particular market might experience a correction, we can review the fundamentals, look at past bull markets, and demographics to determine with reasonable comfort where prices “should” be. Back in the old days, before Central Banks controlled all aspects of asset prices and rendered this kind of information irrelevant, this was called “fundamental analysis”.

1)      The concept of price insensitive buyer and sellers that was recently discussed by Ben Inker at GMO – In this piece Mr. Inker identifies a particular type of asset buyer where

“the expected returns of the assets they buy are not a primary consideration in their purchase decision”.

Inker’s views do a great job (I think) of foreshadowing future problems in the Vancouver market: “in order to see massive changes in the price of a security, you don’t need the price insensitive buyers to become a seller. You merely need him to cease being the marginal buyer”.

Students of history will recall Japan’s insatiable demand for exotic real estate in Hawaii during their economic boom of the early and mid 80s. At that time you had a country experiencing a massive economic boom that pushed domestic prices through the roof. In response many wealthy Japanese (like their Chinese counterparts today) started accumulating vast properties in a very small, concentrated area. In the case of Japan it was Hawaii, in the case of China, it is Vancouver. As such, it is worthwhile spending a bit of time finding out what happened when the Japanese economy slowed down in 1989. The Federal Reserve Bank of San Francisco wrote a paper on this issue entitled,“Fluctuating Fortunes and Hawaiian House Prices” that I would suggest is worth a review.
2)      My second point would be to not allow yourself to become too complacent about the markets. Paying a 35% premium to the going market price is not a normal, sustainable phenomenon. Imagine all of your other major purchases following the same pattern. For example, you go to a coffee shop and order a Latte. The bill is $3.50, but you are told that if you really want your latte immediately, you will need to pay $4.73. You then go to the grocery store to get some food for dinner. When you get everything checked out, the bill comes to $85.75 – but again you are told “if you want it now” you will have to pay $115.76. You can see when the current real estate environment is removed from its’ market friendly narratives – that the process is a bit illogical. At the very least it should provide some caution towards our actions and attitudes – and the desire to get more information so we can better understand what’s driving this marketplace.
In the end, no one really knows if or when the Vancouver market will correct. “When the bubble pops in Vancouver” has been the subject of speculation for years. What I find interesting is that we do in fact have the data and ability to see exactly who and/or what has been driving the markets, but instead we choose to ignore this opportunity. Maybe it will be fine in Vancouver, or maybe decades from now we will read another research piece by the San Francisco Fed entitled, “Fluctuating Fortunes and Vancouver House Prices”.